Back to U.S. Mint Home
You are here: Home / About the Mint 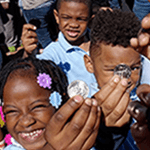 The United States Mint is the government agency that makes coins! Coins are small, metal discs that people use as money. The Mint makes sure people in the U.S. have coins to spend, save, or collect.

In colonial America, people used coins from other countries, livestock, or crops to pay for goods and services. The U.S. Mint was created in 1792 so that America could have one standard form of money.

Fun Fact! Coins and paper bills aren’t made by the same agency. The Bureau of Engraving and Printing (BEP) makes paper money.

The Mint has six locations across the United States. Learn more about what makes each location special.

What Coins Does the Mint Make?

The Mint makes circulating coins for spending. When people and businesses use these coins as money, they are “in circulation.” The denominations you’ll see the most are the penny, nickel, dime, and quarter. The Mint makes half dollars and dollars for collecting, but you can still spend them.

Fun Fact! The Mint makes more than 10 billion circulating coins a year. Cha-ching! It would take you 317 years to count all 10 billion coins.

Congress can create a coin program around a design theme to inspire coin collecting. For example, the 50 State Quarters Program included one quarter for each state and territory. Browse our current and past circulating coin programs.

What Else Does the Mint Make?

The Mint makes more than just circulating coins. Collectible coins are for people to save and collect. These coins sometimes look like circulating coins or have special designs honoring people or events.

Investment coins are called bullion coins. They are made from precious metals, such as gold and silver.

The Mint also makes medals. Medals aren’t money, they’re awards. The Mint makes a type of medal called Congressional Gold Medals for Congress to honor people who have made our country or the world a better place.